I have been fascinated by this “process” called The Hero’s Journey ever since I was first introduced to it from my Go 90 Grow class back in the fall of 2013.  I wanted to learn all I could about this hero’s  journey thing, so I decided to read whatever I could find on the internet  and I would ask my family, friends and co-workers if they had heard of this and how did it touched their lives.  No one really knew what this was or could tell me how it had affected their lives thus far.  I learned that the term “Hero’s Journey” was first coined by a man named Joseph Campbell back in 1949.  He had written a book named The Hero with a Thousand Faces.   Joseph Campbell, an American professor who studied the myths across different world cultures and found that they had common patterns of story woven through them. This pattern is called…..”The Hero’s Journey”.  The Hero’s Journey can be described as having several steps to it.  Here is a listing of those steps that we take during our lives. 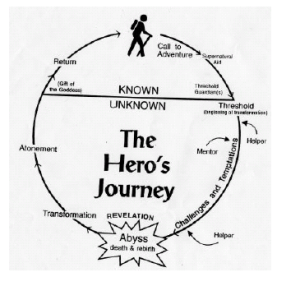 You begin in the mundane world, where everything is status quo. Or is it? Everything seems ok, and that’s just the problem, isn’t it? Everything is just ok. But sometimes, a soft little voice inside your head tells you that there should be something more. You can’t quite articulate it yet, but you just get this nagging feeling, maybe it’s you, or maybe it’s everyone else, but life can’t be just about this…

Where are you right now in your life? Is it where you want to be? Or do you get the sense that something’s just not quite right, that something needs to be changed? Maybe it’s not about the external environment; do you feel that it’s you who needs changing?

You feel it, don’t you? That there should be something more.

Listen to the voice that separates you from your ordinary world, because it’s asking you to take a step further on your Hero’s Journey. What does it say?

The Call to Adventure

All this time, you’ve felt a nagging feeling that something’s not quite right, that something needs to change, and there should be something more in your life. You haven’t thought about it till now, but as you reflect on that message in The Ordinary World, you realize just what it is.

In The Call to Adventure, you will face 2 things: the pain of something in your life that you’re no longer willing to accept, therefore you must move out of your old world, or the pleasure of a new goal, that will thrust you into The Hero’s Journey.

What is it you’re no longer willing to accept any more in your world? And what is a new goal that you want to set for yourself, a goal enticing and powerful enough that would want to make you leave behind your old world and step into a new one? That’s the treasure you seek.

And this is your Call to Adventure.

But is this the first time you’ve heard this call? In The Hero’s Journey, many heroes actually refuse the first call to adventure. They might be reluctant to do so, perhaps they fear the challenges that they imagine they might face, or they think perhaps they’re not the best person for this mission.

“Our deepest fear is not that we are inadequate. Our deepest fear is that we are powerful beyond measure. It is our light, not our darkness, that most frightens us. We ask ourselves, who am I to be brilliant, gorgeous, talented, and fabulous? Actually, who are you not to be? You are a child of God. You’re playing small doesn’t serve the world. There’s nothing enlightened about shrinking so that other people won’t feel insecure around you. We are all meant to shine, as children do. We were born to make manifest the glory of God that is within us. It’s not just in some of us; it’s in all of us in
everyone. And as we let our own light shine, we unconsciously give other people
permission to do the same. As we’re liberated from our own fear, our presence
automatically liberates others.” In short, it’s inauthentic to recognize that you are the Hero in The Hero’s Journey.

For heroes who refuse the call to adventure, there’s only one thing that happens: they flounder. They start dying inside…but the call keeps coming, until one day they have no choice but to answer the call. Events sweep them up into motion, they find themselves drifting along without a direction until they’re just before a waterfall and they realize they have to start paddling like crazy or they’re dead. They are forced they don’t choose to undertake The Hero’s Journey.

An interesting thing happens as soon as you commit to The Call to Adventure, when you’ve had it, things are going to change, they’re going to change now, you’re leaving The Ordinary World of the status quo and there is no turning back; a wise mentor appears to guide you.  It’s simple. Haven’t you heard someone tell you about their goals in a very wishy-washy, not sure kind of way before? When it’s obvious they’re not committed? Do you feel inspired? But what happens when you listen to someone describe their goals with utter conviction? You feel like helping them, don’t you? You’re swept along by their drive! You think of someone they should talk to, a book they should read, or a company they should approach. A wise mentor might appear in the form of a person, a book, a movie, or the lyrics of a song. He or she might appear to give you a special tool, advice, or training to help you face the challenges in your Hero’s Journey.

As you think about the treasure you’re after in this journey, what are the wise mentors you could use? In this day and age we’re surrounded by an abundance of mentors, either people you can meet in person, talk over the phone, thru the internet, or books, videos and audio programs from experts you haven’t even met, from across the globe, who can give you instant advice.

As you go across your day, keep your eyes and ears open. Notice what mentors ‘magically’ pop out to give you advice you can use. Is it going to be someone you meet? A song you overhear? A book you glance over? A course introduced by a friend?

And who would you choose to be the wise mentors in your Hero’s Journey and what would they tell you?

You’ve committed to leaving behind the Ordinary World and stepping into the New World of your Hero’s Journey. And as you do, you’re exposed to new sounds and sights, new learning, surprises, adventures and experiences you’ve never had before.

As you do so, you might feel out of place. You might feel uncomfortable, inexperienced. You are the proverbial babe in the woods. You ask yourself, ‘What was I thinking to leave my ordinary world behind?’. We’ve all been in situations like this.

But you’re stretching beyond your old self.

Sometimes, when crossing the first threshold, you meet with boundaries. It might be the environment, a roadblock or obstacle in the way, the road might be too far away, a storm or a drought might test your resolve, or it might be people, who come up and challenge you.

Meeting Your Helpers and Your Challengers

These are the Threshold Guardians, who will test if you’re serious about setting out on your journey. The Guardians are there to test your commitment, they might throw all kinds of obstacles, threats or difficulties in your way to make you back off and go home.

The Threshold Guardians will not waste their time, they’ve seen too many people who start out with grand ideas but give up at the very first obstacle. But once you’ve shown these guardians you’re not only inspired, but committed; by locking down and doing the hard work, ignoring naysayers who want to discourage you from leaving the flock, by leaving behind cumbersome luggage that was only weighing you down, by passing the guardians’ tests; you are allowed passage into the brave New World.

Now from here you will go through four more stages of your “Hero’s Journey”.  They are called….Into the Innermost Cave, The Supreme Ordeal, Claiming Your Treasure and Your Journey Home.  I have left these last steps out of our blog due to our space limitations and to inspire you to research this “process” further.  I must ask you this question. Can you see this process going on in your life?  Maybe when you were thinking about getting married, starting a new job perhaps.  How about when you went to college, or joined the military.  Please leave us a comment and let us know where you see your “Hero’s Journey” in your life. How you have handled your journey?